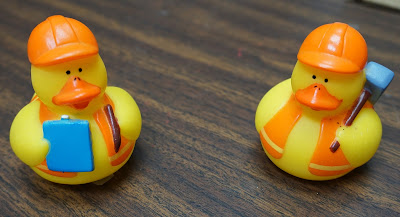 "Hey Howard!" Bob said.
"Hiya Bob!  Where's your mask?" replied Howard.
"Where's YOURS?  I guess I don't have one, but we're social-distancing," Bob admitted.
"I don't think we're six feet apart, Bob," Howard smirked.
"No, but we're only two inches tall, Howard," Bob reminded Howard.
"Oh.  I guess that makes a difference," Howard said thoughtfully.
"A bit.  So, how have you been, Howard?" Bob inquired.

Howard sighed. "Well, not so good.  I can't get online to pay my bills and do my studies but they don't want me to roam far from the pond, either."

"Why can't you get online, Howard?" Bob pried.
Howard pouted in a duckly way. "Well, I don't have internet, and the library is closed when I need to do stuff.  So what can I do?"

Bob smiled, "You can check out a hotspot."

Howard looked confused.  "Why would I want to check out a hotspot?  This is Texas.  Hotspots are everywhere!"

Bob explained, "Not that kind of hotspot.  A 'hotspot' is a little gizmo that lets you connect to the internet."
"I told you I don't have internet.  And I already have a laptop," Howard quacked, exasperated.

"No, a 'hotspot' IS internet.  You connect it to your device and there you go, you're online." Bob bobbed his head.

Bob chuckled.  "Nope.  And you can check them out from the library!"

Howard did a double-take.  "You mean, like a book?"

"Pretty much.  First you have to sign an agreement form, though," Bob added.

"No, no," Bob clucked, "it's just that a hotspot is pricey and the library wants to be sure you will be responsible and take care of it.  You know, don't take it in the pond with you or throw it in the book drop."

Howard pondered a moment.  "Oh, I guess I can understand that." 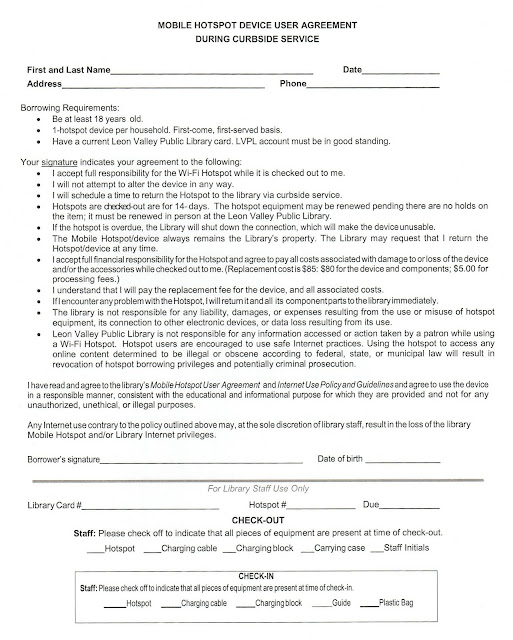 Bob assumed a pedantic pose. "All you need to do is call up the Leon Valley Public Library and say you'd like a hotspot, and the staff will set a form out on the porch for you to fill out when you can get there.  After that, if a hotspot is available, you can check out one, just like a book."
Howard paused.  "For free?"

Bob detailed, "For free if you are a LVPL member in good standing, of course!"
"WOW."  Howard soaked that in for a minute, flabbergasted by such astounding news.  "Then what?"

Bob inhaled, "Then you can take it home, or wherever you want to do your internetting, and connect it to your device to get online."

"On anything?" Howard slitted his eyes somewhat in disbelief.
"On anything that can connect to wi-fi, or can get online and has a USB connection, I'm pretty sure," Bob informed.
"So like, a laptop? A tablet? A phone? A desktop?" Howard listed.

"Yup, all those things," Bob agreed.  "But just one hotspot per household, so you might not want to do them all at the same time!"

Bob snickered. "I never know with you, Howard."

Howard gave Bob a look, then started, "How do I connect, then, Bob?"

Bob waved his little clipboard around in the air. "When you check out a hotspot packet, you'll have all this:  A hotspot (with a battery), a charging/connection cable, a charging block (wall plug thingie), a little instruction guide, and a plastic baggy to carry it all in." 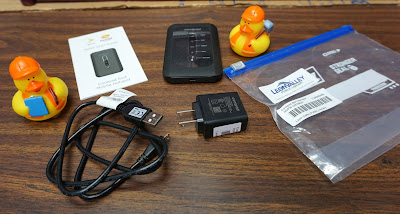 Howard ogled the device. "Ohmigosh, Bob, the hotspot is HUGE!!
How will people use THAT?" 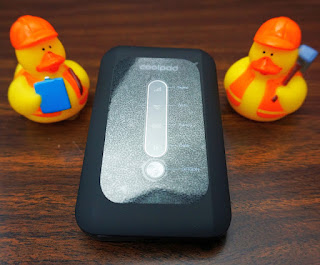 Bob attempted to educate Howard. "The first thing you'll want to do is to make sure the battery is charged.  You can go ahead and start charging it, or turn it on to see if it seems to be working ok."

"How do I do that, Bob?" Howard wobbled around the hotspot.

Bob cleared his throat.  "To charge the hotspot, you just connect the tiny end of the charging cord to the hotspot jack, and connect the USB (fatter) end to the charging block, then stick that plug in a wall plug or the like.  Or you can just use the USB end, if you have something that charges USB things." 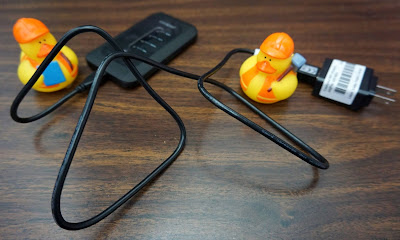 "To turn on the hotspot, you just press that On-Off button, the circle towards the bottom, for about 3 seconds.  The helpful finger will show you exactly where it is," Bob elucidated constructively.

Howard shook his feathers.  "I think I've got it, Bob."

Bob thought he heard the slightest bit of annoyance in Howard's reply.  "There is the little instruction booklet, Howard, if you would rather just read how to do it."

Bob stamped around for a moment.  "OK."  Bob preened. 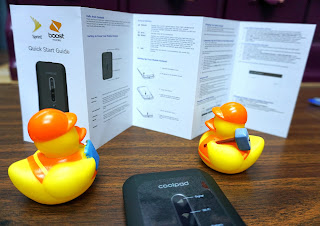 "Now the button is a little tricky and sometimes you have to try again, but if the battery has juice, the little icons on top of the hotspot will turn green when the machine is on."  Bob beamed.

"It needs juice?"  Howard turned about.  "Orange or grape?"

Howard licked his bill.  "I don't think I've had that kind.  Sounds spicy." 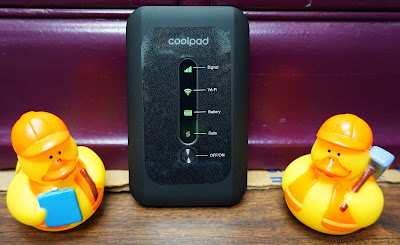 "If you have a wi-fi enabled device, you turn it on and go to the section in your internet stuff that shows you which networks are available.  If you need to, turn on your wi-fi first, of course.  If you don't have a wi-fi gizmo, like an ethernet-connected desktop, then connect the hotspot with the charging cable to a USB jack," Bob stated matter-of-factly. 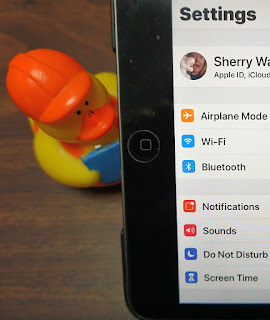 "Look for the list of networks.  After a minute or two, CoolpadSurf_xxxx should show up in your list of options.  (xxxx is a number, the last four digits of the device's number/barcode)."  Bob continued. 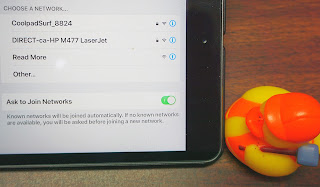 "That's the network your little hotspot is offering.

"So you select that network." 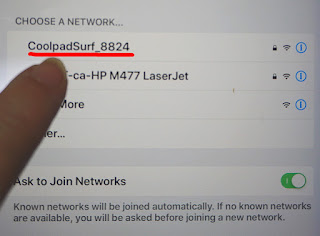 Howard inspected the screens and followed the helpful finger. "Fine so far, Bob.  Turn everything on, find the CoolpadSurf network.  Gotcha."

"Good," expressed Bob with delight.  "The next box will ask for your password.  That's the eight-digit number next to HSPW on the barcode sticker, which is on the back of the hotspot." 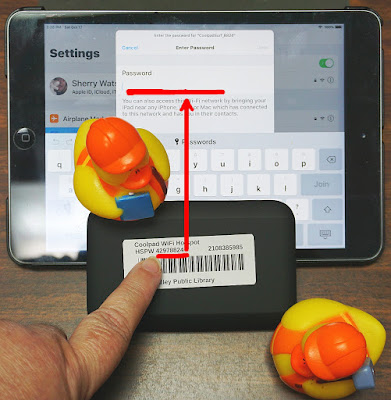 "That's it!" Bob confirmed.  "Just remember to turn it off when you aren't using it.  It turns off pretty much the same way it turns on, though it looks like everything is on and green for a minute, then shuts down." 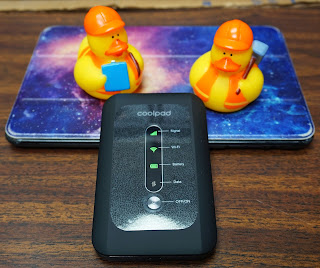 Howard flapped in exultation.  "Awesome, Bob!"
"I thought you'd like it, Howard!" Bob puffed, quite pleased.

"Hey Howard, where are you going, you just got here?" Bob yelled.

Howard didn't even look back.  "I'm going to check out a hotspot.  I've got stuff to do!" 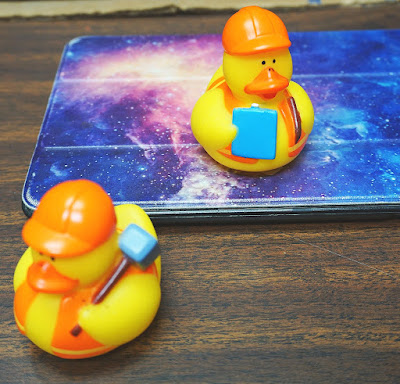 Email ThisBlogThis!Share to TwitterShare to FacebookShare to Pinterest
Labels: hotspots