Well, last weekend we noted that about 50% of shoppers were wearing face masks, but after the announcement that wearing masks was strongly recommended, that went up to around 90%.  So I broke down and looked into actually making one, since my bandanna didn't want to stay put and I am so into the latest fashions (coff).

I looked at what I had (other than the bandanna) and whipped up a fancy pleated one from an old hoodie, using the hood for the main part and an upper ribbon velcro-fastened in the back, with a long lower ribbon to tie around the whole thing.  Quite effective gizmo.  But after one day's trial, I deemed it a terrible mistake, at least in south-central Texas.  It'd make a great ski mask, but it was a lobster-boiler in hot and humid weather.  When I took my mom to the bank's ATM, we couldn't help but think we'd be pegged as bank bandits.

Anyway, don't use heavy double-knit for a mask unless you're trying to scald off a beard.

But it's a backup.

So I went online and scoured through a bunch of masking possibilities, saw the no-sew versions and cool ones and fancy ones and paper ones and simple ones there and on TV, and finally decided to give this one a go:

Mostly because I can machine-sew, it looked pretty simple as patterns go, and I didn't have any relevant sorts of elastic handy.

I made a couple, but until I can take apart my sewing machine, I probably won't be mass producing them.  The tension on my workhorse of a machine is all whacked up, so no matter what tension I put it on, the seams look like little lines of barbwire fencing.  It being a Montgomery Wards machine, I probably can't just buy a part for it or something (who would have thought in the '70's that Montgomery Wards would bite the dust??) so I'll have to take a Serious Look at it.  At any rate it still connects fabric together.

My other problem was having the appropriate supplies available.  I had denim jeans and socks, though those didn't seem to fit the bill.
Finally found an old pillow case.  And red thread.  So be it.
Sew sew sew and away we go! 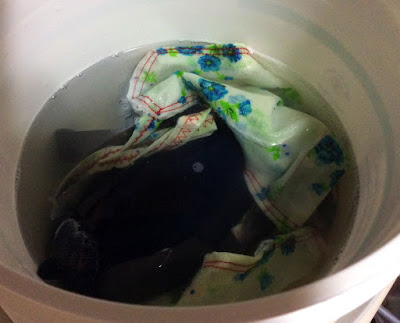 Gotta keep masks clean, so I found a bucket to wash them in (for daily use or whatever) with a bit of detergent and bleach. 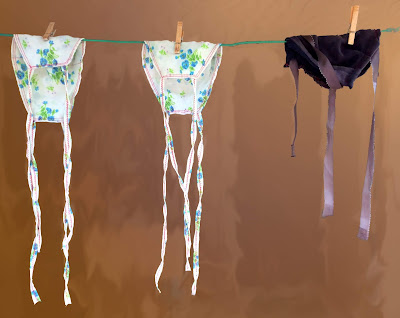 Air them out to dry a bit...
(the background is just fuzzed out, it isn't in a dust storm).

the pinnacle of pillow case couture.

Your mileage may vary.